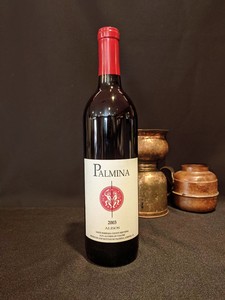 This vintage’s blend of Sangiovese and Merlot grapes achieves not only a fantastic balance between the two varietals, but also a wonderful expression of the singular soil in which they were grown. The Alisos vineyard is in the Los Alamos Valley about 5 miles east of the town of Los Alamos. The steep south-facing hills, low yields and cool growing conditions produce superb fruit is superb, producing wines that are flavorful and concentrated.

An interesting aspect of the winemaking for Alisos is Steve’s decision to air-dry 10% of the Sangiovese grapes. These grapes were placed on drying racks imported from the Veneto, Italy and then allowed to dehydrate for about five weeks, in a traditional winemaking method often seen in Amarone. The rest of the Merlot and Sangiovese grapes were picked in October and then separately fermented in small open top bins for 32 days, while being punched down by hand four times per day. Upon completion of fermentation, the new wines were separately barreled into neutral French oak barrels. The dried portion of Sangiovese was slightly re-hydrated, pressed and also barreled separately. After nine months of aging, the wines were blended right before being bottled, unfined and unfiltered. 350 cases produced.

Wine Specs
Vintage
2003
Wine Profile
Tasting Notes
A wine that demonstrates the power of blending, Alisos combines the softness of Merlot with the red fruit aromas and flavors of Sangiovese. The technique of drying a portion of the Sangiovese and adding that to the blend adds a base of darker fruit and prune notes that balances the red fruits of Sangiovese and Merlot. The nose of this powerful and inviting wine includes raspberry and anise, with flavors of black cherry, red fruits and ginger with hints of cedar and almond skin tannins.
Food Pairing Notes
Alisos really shows itself off when paired with hearty food such as grilled pork chops with braised fennel or mushroom ravioli.
View Product Details »