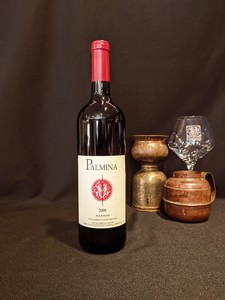 Back in 1995, owner/winemaker Steve Clifton created the wine that was to launch Palmina. It was to intended to be a food wine of extreme focus – a stylistic wine of concentration and structure to showcase the best of both the Sangiovese and Merlot grape varietals in the blend. First named Vino Tavola de Costa Centrale because it is such a food wine, this labor-intensive passion project utilizes many winemaking techniques from the Veneto region of Italy and the superb grapes from the Alisos Vineyard in Santa Barbara County. It is fitting then, that since 2001 this wine has been named Alisos to herald its sense of place.

A percentage of the Sangiovese was set aside to dry into raisins, in an appassimento method passed down through generations in Italy’s Veneto. The balance of Sangiovese and the Merlot (which wa harvested separately and later in the season) were fermented in small, open top containers over a 2-3 week period of time before being moved to barrel to complete their evolution. After about 100 days of drying, the Sangiovese raisins were re-hydrated and then fermented to dryness.

These three components – Sangiovese, Merlot and appassimento Sangiovese provide a palette of flavors and textures for the ultimate blend, which in 2008 included 80% Sangiovese (of which 8% was appassimento) and 20% Merlot. The wine then spent twenty months in barrel to allow the layers to marry, tannins to lengthen and fruit and acid to integrate. The result is pure style, and pure Palmina.

Wine Specs
Vintage
2007
Wine Profile
Tasting Notes
Alisos first promises depth with color - a deeply colored ruby with glints of intriguing crimson shining through in the beautiful clarity of the wine. A swirl produces wafting aromatics of red plum, dried raspberry and hints of lavender and violet. A sip confirms the bouquet, but is additionally rewarded by a smooth and silky texture as Alisos glides across the palate, leaving remembrances of blueberry and black cherry from the Sangiovese, earthy and meaty dark notes from the Merlot and herbs d’provencal nuances from the apassiemento Sangiovese. The lively acidity, barrel aged tannins and layered structure allow the soft fruits to show through in this superbly balanced food wine.
Food Pairing Notes
Alisos really shows itself off when paired with hearty food such as grilled pork chops with braised fennel or mushroom ravioli.
View Product Details »